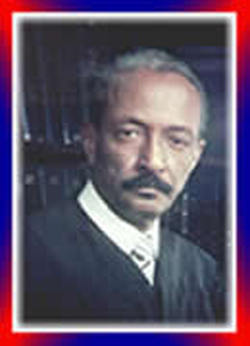 "I can and I will" is the motto that guided the life of the Honorable Addeliar D.Guy III. Judge Guy was born and raised in Chicago, Illinois. He received his undergraduate degree from Loyola University and his law Degree from Loyola University School of Law. He served as Assistant Corporation Council for the City of Chicago and was a partner in the law firm of Peterson, Johnson, and Guy until he moved to Las Vegas in 1964.

He believed that education was the "key" so he established the Addeliar D. Guy III Law School Scholarship Fund and the "Spirit of Nevada" Art and Essay Contest for middle and high school students. His caring for the community and especially for young people was evidenced by the many civic organizations of which he gave his time. Some of these included: Addeliar D. Guy Boys and Girls Club Advisory Board, NAACP Advisory Board, National Conference of Christians and Jews Executive Board, Boy Scouts of America Advisory Board, Community College of Southern Nevada Advisory Board, Senator Harry Reid's Academy Selection Board and Alpha Phi Alpha Fraternity.

During his tenure as District Court Judge, his judicial experience included Juvenile Court Judge, Chief Judge District Court, and Alternate Justice to the State Supreme Court. His reputation for being compassionate and fair, yet strict when needed, generated such respect that he received Christmas cards even from prisoners.

We at Addeliar D.Guy III Elementary School are very proud to honor his name and continue his motto, "I Can And I Will."